I am dismayed and I am hope-filled, I am angry and I am determined.

Yesterday at the Evo DeConcini Federal Courthouse in Tucson, Miriam became a US citizen together with 44 other persons. It was a beautiful ceremony-- persons from different backgrounds, young and old from 13 different countries throughout the world-- becoming part of the fabric of this country.  They were reminded in the ceremony that they are a renewing force in our nation.  They were reminded that we are a nation of immigrants who have the Statue of Liberty as a symbol to the world that we welcome "the tired, the poor, the huddled masses yearning to breathe free."  Tears came not only my eyes but to many peoples eyes.

Judge Raner Collins encouraged people to share their thoughts-- he said that this was the only good thing that happens in this courtroom and he wanted to hear people's hearts. Immigrants are a strength of the nation and yet are so often demonized.

The same court room where Miriam and her fellow new citizens took the oath has been the scene of Operation Streamline 5 days a week since 2006 where 70 of the tired, the poor, the huddled masses are criminalized each day.  Streamline was a dramatic change in policy that began prosecuting people who were migrating to the US without documentation.  The policy that was begun in the Bush Administration continued in the Obama Administration and continues in the Trump Administration.

And now, the Trump Administration, on our behalf, has instituted a policy to separate children from their parents and has the gall to use the Bible as a justification.  Can you imagine Jesus, the one who had to flee Herod's deportation force with his family, taking a child away from their parent?  Can you imagine Jesus, the one who said let the children come to me, traumatizing a child in such a way?

I am grateful to be a part of a ministry that not only helps me to do this, but also helps individuals and churches on both sides of the border live into the reality of the kingdom of God.

May God give us wisdom and courage to be a force for keeping families together! 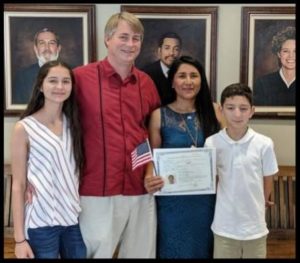 Worship with us! Online In Person